New technology is the key to engaging the top-end talent the industry requires, the founder of Grad Mentor says.

In an effort to bolster Grad Mentor’s already expanding footprint, Alisdair Barr, who started the financial advice graduate placement provider in 2013 after an executive career, has launched a chatbot that uses social media to attract potential candidates.

“We’re focusing on tech investment at the moment, and how that can improve the way we match students to businesses and vice versa,” Barr tells Professional Planner.

The chatbot is part of a broader focus on enhancing the technological offering to potential placements, which in turn should lead to more volume and ultimately a higher calibre of graduates for advisers to canvass, he says.

The tool itself is a giant leap from Clippy the Paperclip. It uses predictive technology to guide candidates through a quick, chatty process in which the important fields – degree, city, career preferences – are covered, and a level of interest is gauged.

“Once students hear about us, they tend to engage through the web and social media, so it made sense to tap into that,” Barr says. “We’ll generally send them an invitation through Facebook Messenger, and then a script takes them through the process of sharing information and leads them to upload a quick video of themselves answering a couple of simple questions.

The user experience for the chatbot is relatively straightforward, and tailored for millennial sensibilities; emojis are employed liberally and users have the option of re-taping their video if they’re not happy with it.

“It’s a new medium for engaging people,” Barr says. “When we get them interested in the tool, they get more excited and engaged in the process of finding a great role with the right financial planning firm. For advisers, this means more kids are filtering through to them and they’re being put in contact with a better pool of talent.

The bedrock of the Grad Mentor program is a series of seven-minute speed networking events in Sydney and Melbourne, where thoroughly vetted graduates speak to representatives from firms. “This is where the energy and hype comes from,” Barr says. “There’s a real positive feel to it. No one is committed to anything, it’s just a meeting of bright-eyed and bushy-tailed kids looking to set up a great career, and advice firms that are on the lookout for outstanding young talent.”

While the financial advice space is the primary focus for Grad Mentor, Barr has in the pipeline a broader application for the program across other business channels. It’s already making inroads in the accounting sector.

“There’s an obvious convergence between financial advice and accounting,” Barr explains. “I think in the future, accountants, much like advisers, will be more holistic and the successful ones will be much more relationship based. Both professions need people who can show empathy and understand needs, so they’re both a natural fit for us.” 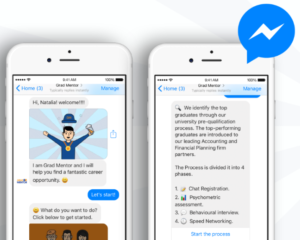 Financial planning placement, however, is still clearly the bread and butter of the business and the engine that is driving growth. Grad Mentor placed more than 60 selected students with financial planning firms in 2016 and is on track to meet its target of triple figures in 2017. Yet Barr is adamant that numbers are secondary.

“Our focus isn’t on finding new clients. It’s about improving the way we find and mentor kids, and putting them in front of the right firms. The chatbot we’re releasing today is a big part of that proposition.”

Just some of your daily news....